Training intensity refers to the exertion level put forth during training. Is your workout “easy” or “hard”? Were you able to talk while doing that run or were you gasping for air? How fast did you swim that interval? These are all factors that can help characterize the intensity at which you are working. As indicated by the previous questions, intensity can be measured in a number of ways. 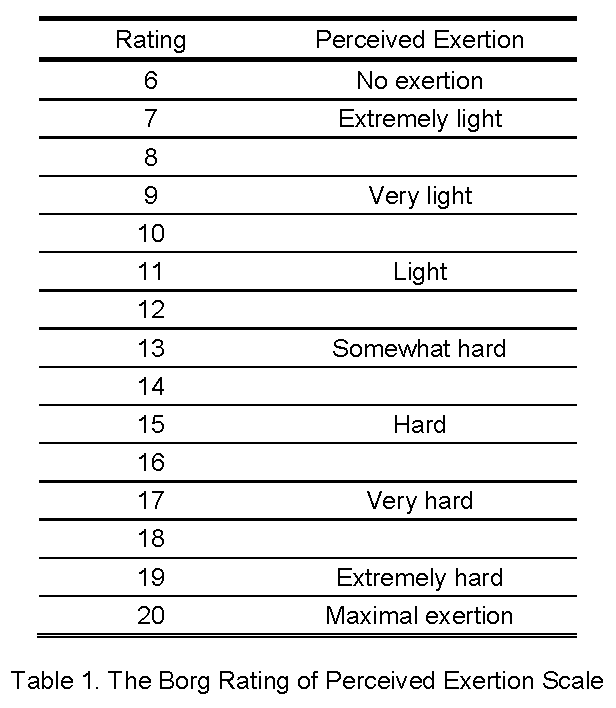 One of the most basic tools for measuring exercise intensity is to use a rating of perceived exertion (RPE), such as the Borg RPE scale (6-20), as seen in table 1, or Borg category-ratio scale (0-10). The exerciser subjectively evaluates how they feel during a workout and points to a number on the scale to quantify their perceived exertion level. Speed or pace measured with a stopwatch is another way to measure intensity—faster speeds mean higher intensity. Recording power output, such as with a power meter on the bike, is yet another way. And so is using a heart rate monitor. Each of these tools indirectly measures the workload you are putting your body through during exercise. They provide windows into what is happening inside the body at the cellular level as you generate energy for the demands of the activity. None of these tools are direct measurements of that metabolic activity; they are indirect approximations.

A more direct way to gauge intensity for the endurance athlete is to measure the amount of lactate in the blood during exercise. As discussed earlier, the amount of blood lactate increases as the training intensity increases. While measuring lactate is an ideal way to gauge intensity, drawing blood during a workout to directly measure lactate levels is impractical. But if one can correlate lactate levels with another measurement tool, such as heart rate or pace, then it’s possible to gain a much more accurate picture of the intensity level at which you are working. And this allows you to effectively monitor your training intensity to target different training effects, or types of fitness gains. Heart rate can easily be measured during workouts with a heart rate monitor. And pace can be measured with a stopwatch (if you also have distance markers such as on a track or in the pool) or GPS watch.

For most running and cycling training, using a heart rate monitor is preferable. Using running pace, or target times for intervals on the track or known running courses is also an option. But the more the terrain varies the less accurate pace is as an indication of exercise intensity. For example, if you are running up a hill with a 12 percent incline, your intensity level will be much higher than for the same pace run on a flat surface. Your heart rate monitor will better reflect the difference in exercise intensity between those two efforts than your watch.

For swimming, using a heart rate monitor—even if there were one that worked under water—would be cumbersome. Fortunately, most swimming pools are equipped with a pace clock. Even if you don’t swim at a facility with a pace clock, you can use your watch to monitor pace. In the pool, the distances are fixed and the conditions are more or less predictable (no uphill or downhill). So you can effectively use swimming pace to monitor training intensity in the pool. In sum, for running and cycling, a heart rate monitor is the tool of choice; and for swimming (and to a lesser extent running), the pace clock is the tool of choice.

Your training zones are the target ranges (of heart rate or pace) that will be used to prescribe workout intensities.

The first four zones correspond to aerobic intensity levels. The last three zones fall within the anaerobic range. The lactate threshold falls right between Zone 4 and Zone 5a, acting as the boundary between aerobic and anaerobic intensity.

Of the four aerobic zones, Zone 1 is used primarily for recovery and warmup or warmdown efforts. On the Borg RPE scale it would fall roughly between a rating of 7 and 8, or an extremely light to very light effort.

Zone 2 is the primary aerobic base building zone. This is the zone for long runs—popularly referred to as long slow distance (LSD)—and, of course, any long endurance session in other disciplines. On the Borg RPE scale it would correspond to about 9 to 11, or very light to light. It can also be thought of as “conversational” pace, meaning you can still talk with a training partner while running at this pace. This is the aerobic base pace used to develop extensive endurance.

Zone 3 represents a more challenging aerobic pace. It’s still well within the aerobic range but involves a peppier tempo that can be hard for the uninitiated or untrained. It corresponds roughly to 12-14 on the Borg RPE scale, or a somewhat hard effort. I think of this as aerobic tempo pace. Working in this zone is a stepping stone to tempo work that is closer to LT. It is used sparingly, but can play a role during base training to prepare the body for higher intensity lactate threshold sessions to come.

Zone 4 moves toward the lactate threshold but remains sub-threshold. It corresponds roughly to 15 on the Borg RPE scale, or a hard effort. This is the “comfortably hard” effort that runners refer to when talking about tempo runs. The lactate threshold arrives at the bottom of Zone 5a, so Zone 5a corresponds to the super-threshold range. On the Borg RPE scale it would correspond to about 16, or between a hard and very hard effort. The sub- and super-threshold zones represent an important range that targets increases in the LT. Tempo workouts and cruise intervals in Zones 4-5a improve lactate tolerance and decrease lactate accumulation, which enhances the ability to sustain race pace.

Zone 5b is the next step up in the anaerobic range. It corresponds to 17-18 on the Borg RPE scale, or a very hard effort (bordering on extremely hard at the upper end). This range typically corresponds to the athlete’s maximal oxygen consumption, or V̇O2max. Working in this zone expands aerobic capacity and enhances anaerobic endurance, or the ability to work anaerobically for events or portions of events that last a few minutes in length—such as the 800m or 1500m track events, the start or finish of the swim portion of a triathlon, hard climbs you encounter during running or cycling, etc.

For more information on how to determine your training intensity zones and create a systematic training program to guide you toward your athletic goals, read The Endurance Athlete’s Guide.