By James A. Peterson, Ph.D., FACSM

A RAVENOUS LOVE AFFAIR. Flavorful seduction. For many people, chocolate has the power to captivate like no other foodstuff. Not surprisingly, a whole lot of chocolate is produced and consumed worldwide annually. In fact, chocolate accounts for almost twice as much in sales each year than all other non-chocolate candy items combined. 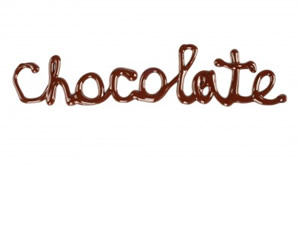 LEADING FROM BEHIND. Not all countries in the world enjoy the sweet taste of chocolate equally. Despite the fact that Americans consume more than 3 billion pounds of Theobroma cacao (the scientific name for chocolate) annually, the United States only is 10th in the annual consumption of chocolate. On average, Americans eat about a pound of chocolate a month—a figure that pales in comparison with that of each resident of Switzerland (consumption wise, the leading country) who partakes almost twice that amount during the same period.

A HEALTHY ALTERNATIVE. Chocolate can be a healthy addition to a person’s diet. In fact, several recent studies suggest that cocoa, the base of chocolate, can provide noteworthy health benefits for individuals. In its natural form, cocoa has been shown to lower blood pressure, improve circulation, and reduce the risk for diabetes and coronary heart disease.

THE DARKER, THE BETTER. Because chocolate is made from plants, it contains many of the benefits of dark vegetables. The genesis of these benefits is the existence of plant-based antioxidant compounds, known as flavonoids, that are found in chocolate that help protect the body against the various problems caused by free radicals. As such, the darker the chocolate, the higher it’s likely to be in flavonoids. In turn, the higher the level of flavonoids, the greater the level of potential health benefits.

NO FREE LUNCH. In reality, dark chocolate not only can offer health benefits that other types of chocolate can’t, it also has some health-related side effects that neither milk chocolate nor white chocolate has. For example, dark chocolate has a higher level of caffeine that can lead to several potentially problematic issues, such as an increased heart rate and an elevated level of anxiety and irritability. The chemical makeup of chocolate also can increase a person’s chances of having kidney stones or experiencing migraine headaches.

PEACE OF MIND. Research suggests that eating a moderate amount of dark chocolate on a daily basis can significantly reduce an individual’s level of stress hormones and mitigate the metabolic effects of stress. Furthermore, not only does dark chocolate contain serotonin, which acts as an antidepressant, it also stimulates the body’s production of endorphins, which can enhance a person’s feeling of pleasure.

BRAIN POWER BOOST. Although not conclusive, several studies have found that a possible link exists between eating dark chocolate and mental functioning. For example, one major investigation found that consuming foods rich in flavonoids (e.g., dark chocolate) can boost blood flow to key parts of the brain for several hours, which can enhance both alertness and performance in the short-term. Other researchers who studied the diets of individuals older than 70 years determined that consuming flavonol-rich chocolate can improve cognition levels. Yet another study found that the countries with the highest per person consumption level of chocolate also tended to be the countries that have received the highest number of Nobel Prizes.

AVOID THE NOUGAT. Individuals who want to maximize the health-related benefits of eating dark chocolate should shun consuming any chocolate with nougat, caramel, or other fillings. These substances add sugar and fat to the chocolate, which may expunge many of the benefits otherwise provided by eating the chocolate.

OLD WIVES’ TALES. In a number of instances, chocolate has gotten a bum rap. For example, chocolate does not cause acne. In addition, no definitive correlation has been found worldwide to date between chocolate consumption and obesity rates. Some countries with a high prevalence of obesity and coronary heart disease have a relatively low level of chocolate consumption (and vice versa). Furthermore, chocolate does not cause tooth decay as much as some other foods high in sugar do.

MODERATION, MODERATION, MODERATION. No reason exists for individuals not to eat chocolate in moderation (e.g., a piece or two a week). On the other hand, the purported health-related benefits of chocolate do not increase in a linear fashion with consumption. What does increase when people eat more chocolate is the number of calories consumed. Comparatively speaking, chocolate is a calorie-rich food, with a relatively high level of saturated fat.

James A. Peterson, Ph.D., FACSM, is a freelance writer and consultant in sports medicine. From 1990 until 1995, Dr. Peterson was director of sports medicine with StairMaster. Until that time, he was professor of physical education at the United States Military Academy.