The key to success in running? In triathlon? In the Ironman? How about in life?

The Beatles sang it: “All we need is love.”

Two weeks before Hawaii, Jacobs went to a kinesiologist who performed muscle tests while Jacobs visualized different race scenarios that were thrown at him. The purpose of the drill was to locate situations that allowed negative thoughts and doubt to creep into his mind.

Love became his mantra—a way for Jacobs to focus his mind on the positives and dispel the negatives. The focus on love allowed him to overcome the doubters around him and prevent that doubt from seeping in. (Jacobs recounts his experience in an interview with Ian Murray hosted by the LA Triathlon Club in the video below—discussion of this topic begins around 1 hour 27 minutes into the video.)

It’s not just elite athletes that benefit from a sharp mental focus. Self-doubt and negative thoughts are excess baggage none of us need to carry around. Especially if you’re trying to tackle an Ironman, let alone win the Ironman World Championship, it’s much better to pack light and leave the negativity out of the mental suitcase.

“You’ve just got to love everybody,” Jacobs’ kinesiologist told him.

“That is how you feel more free, and more focused,” Jacobs explained:

[It’s] a way for remembering why you are out there… It obviously hurts really bad, and it’s tough, and it’s hot. And it’s just a way of saying, ‘I’m here because I love it. I chose to be here. I love the training, and I love the heat, I love that it’s tough.’

And you wouldn’t do it if it were easy, that’s why we do the Ironman. So it’s just a way of reaffirming why you are there, and that you choose to be there, and you enjoy being there.

But otherwise, you can go down that negative path: ‘This is too hard, this is too hot—’ And all that other stuff.

You’ve chosen to be there. This is what you want. So enjoy it.

Love is something we don’t often talk about in sports where emphasis is all too often misplaced on destroying opponents. But we know from our kindergarten lessons that love makes the world go around. In other words, love is a powerful force that forms the seed out of which success grows. True success—not just the kind that can be hung on the wall, but the kind that makes athletics a small piece of the larger puzzle of what it means to be human.

The smiling Natascha Badman—the six-time Ironman World Champion who finished sixth this year at age 46—understands exactly what Jacobs is talking about. She has often articulated much the same idea, and she excels at living it every time she steps into a race—happy to be there, enjoying the journey, every smiling step of the way. The bottom line is that one cannot enjoy what they do if there is no love.

In his book about ultrarunning and the running culture of the Tarahumara, Born to Run, Christopher McDougall discusses the topic of love in a passage that focuses on the wisdom of the philosopher coach Joe Vigil: 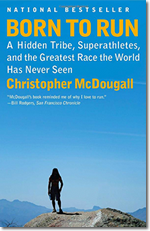 “SUCH A SENSE of joy!” marveled Coach Vigil, who’d never seen anything like it, either. “It was quite remarkable.” Glee and determination are usually antagonistic emotions, yet the Tarahumara were brimming with both at once, as if running to the death made them feel more alive.

Vigil had been furiously taking mental notes (Look how they point their toes down, not up, like gymnasts doing the floor exercise. And their backs! They could carry water buckets on their heads without spilling a drop! How many years have I been telling my kids to straighten up and run from the gut like that?). But it was the smiles that really jolted him.

That’s it! Vigil thought, ecstatic. I found it!

Except he wasn’t sure what “it” was. The revelation he’d been hoping for was right in front of his eyes, but he couldn’t quite grasp it; he could only catch the glim around the edges, like spotting the cover of a rare book in a candlelit library. But whatever “it” was, he knew it was exactly what he was looking for.

Over the previous few years, Vigil had become convinced that the next leap forward in human endurance would come from a dimension he dreaded getting into: character. Not the “character” other coaches were always rah-rah-rah-ing about; Vigil wasn’t talking about “grit” or “hunger” or “the size of the fight in the dog.” In fact, he meant the exact opposite. Vigil’s notion of character wasn’t toughness. It was compassion. Kindness. Love.

Vigil knew it sounded like hippie-dippy drivel, and make no mistake, he’d have been much happier sticking to good, hard, quantifiable stuff like VO2 max and periodized-training tables. But after spending nearly fifty years researching performance physiology, Vigil had reached the uncomfortable conclusion that all the easy questions had been answered; he was now learning more and more about less and less. He could tell you exactly how much of a head start Kenyan teenagers had over Americans (eighteen thousand miles run in training). He’d discovered why those Russian sprinters were leaping off ladders (besides strengthening lateral muscles, the trauma teaches nerves to fire more rapidly, which decreases the odds of training injuries). He’d parsed the secret of the Peruvian peasant diet (high altitude has a curious effect on metabolism), and he could talk for hours about the impact of a single percentage point in oxygen-consumption efficiency.

He’d figured out the body, so now it was on to the brain. Specifically: How do you make anyone actually want to do any of this stuff? How do you flip the internal switch that changes us all back into the Natural Born Runners we once were? Not just in history, but in our own lifetimes. Remember? Back when you were a kid and you had to be yelled at to slow down? Every game you played, you played at top speed, sprinting like crazy as you kicked cans, freed all, and attacked jungle outposts in your neighbors’ backyards. Half the fun of doing anything was doing it at record pace, making it probably the last time in your life you’d ever be hassled for going too fast.

But the American approach—ugh. Rotten at its core. It was too artificial and grabby, Vigil believed, too much about getting stuff and getting it now: medals, Nike deals, a cute butt. It wasn’t art; it was business, a hard-nosed quid pro quo. No wonder so many people hated running; if you thought it was only a means to an end—an investment in becoming faster, skinnier, richer—then why stick with it if you weren’t getting enough quo for your quid?

So with that said, here is how Pete Jacobs embraced the love in and around him at the finish line in Kona: